Since 2013 Windsor has been fortunate to stage the Belfast City ITF Junior Tournament. This is an ITF Grade 5 junior event attracting top junior players from Ireland, Great Britain, Europe and around the world for a week’s top-quality tennis on the courts of Windsor Tennis Club.

The event is coordinated between Ulster Tennis and Windsor Tennis Club Belfast, and generously supported by Belfast City Council and is the only international ranking point tournament in Ulster.

This tournament is a real coup for Windsor Tennis Club Belfast which is working hard to raise the standards and profile of the sport in Northern Ireland, and become the best club for tennis in Belfast. As part of the club’s strategy to become a Tennis Centre of Excellence Windsor has developed its own High-Performance Squad in recent years, which offers top class coaching supported by all round fitness and nutritional programmes.

The tournament is directed by Windsor Racquets Director Simon McFarland and we have welcomed international referee Ugo Lopez each year as tournament referee.

Windsor has enjoyed success in the tournament as in 2013 Karola Bejenaru won the Girls Singles event at the age of 16, and in 2015 Annie and Caitlin McCullough were runners-up in the Girls Doubles. 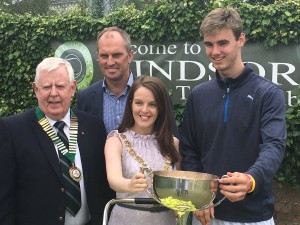